I’ve recently been going through some of my old stuff. Thats the bad thing when you move from house, to house, to student house, back to another house. Sometimes, you just don’t have the room for everything.

I have had to throw away some of my old College work that has been in a box for the longest time untouched. However, in this pile of stuff was a postcard. (I’ll scan it in when I get my scanner set up again.) On the front are four tigers, an arrow pointing to one saying “Gosh look at Kizmit.” (Which has been an online handle for as long as I can remember) This postcard was from one, Michael Dale, Also known as Imperial Doughnut. Of particular note to fangirling, is on this Post Card there is a Wolverine sticker and a quotation; “Heya Jenn, Logan here 😀 *grr* Why have you forsaken me for silly Pinhead?! *cries* It’s just like my crush on Jean Gray all over again :(”

Upon finding this amazing fangirly memorabilia, I was overjoyed. The sad news is, I had to sell a lot of my X-Men comics in order to afford to go to University. I have very little left of my time as an X-Men Fan. Let alone any of my fold memories learning all about Logan!! I was hung up on him for a good long while, and I kind of wish that I still was. Although I tend not to be a big Hugh Jackman fan in his role of Wolverine, I did rather enjoy the moment he had in the recent “X-Men First Class.” It renewed me with hope that I might actually get through Wolverine: Origins without going into a real rage fit! I have put it on my LoveFilm list and will have to see how I get on!
While we are on the subject, I must confess my personal favourite version of Logan is from X-Men Evolution! I have no idea why! Maybe it’s the attitude he has. Maybe it’s the bike, the outfit… or most definitely the hat 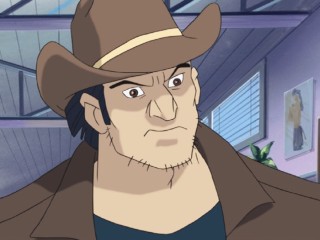 The other sad news is that I’ve not spoken to Mike for the longest of times, and I wish that I still was. I don’t think that it would be that difficult to get in touch, so I may have to try. It was Mike that coded my first ever blog, way back in the day. It was H. R. Giger artwork, and I loved it.

One response to “Going through”