The one that got away

The other night I had a dream about Jeda, this was highly unexpected and seemingly out of nowhere. It wasn’t exactly the most interesting dream, just that the people I was living with found some pictures of Jeda on my ipod and asked about him. That’s all.
I took a great deal of comfort with Jeda, he was very different from the tormented lifestyle that Rhodes had me under; sadly, Jeda didn’t keep the irritable wretch away for very long, but it was nice while it lasted. I was rather taken with his smile.
I think Jeda started something for me as well. The ability to admit my underlying attraction to afforementioned Priests and Templars.

Jeda is originally from a game called Dungeon Fighters Online (Or something to that effect) which I have never actually played, as it is based in another country. However, I did watch the anime series based on it. Arad Senki: Slap up Party. Which was rather interesting. I’ve not watched through an anime series for a fair number of years and going back to it was rather… Wow. Mind shattering!
Jeda mostly served as a bit of comic relief actually, which was rather disapointing. He did have him more serious moments which I prefered from him. I do believe he was also gay. Or percieved that way by the main character (And many viewers) and even more so as a pervert.
Silly anime fans. Priests aren’t like that
*coughs*
GYPO. 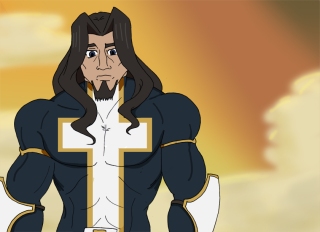