Well, firstly. I’m real sorry for no having updated in a good few weeks. Had some things I felt I had to deal with.
Things not worth going into detail with.

But today – today was the first time I felt like blogging in a while.

And it’s all thanks to my good friend nostalgia – and maybe a little help from my sister.

I took a trip over to Hull for a few days visit – I am sat on the spare bed now hiding my feet under the blanket from a very enthusiastic kitten who wants to play ‘eat the toes’ but I digress.

Whenever we get together it surefire that something crazy will occur. This time it was in the form of Soul Blade.

(What a fetching shade of mint you’re wearing Mitsurugi)

Sorry about the bad picture! I heard it was good blog practise to use your own images in posts – so here is a craptastic photograph taken with my iPhone of the TV while playing.

It’s hard to believe that I remember so much about this game. I honestly recall being blown away by the intro sequence for it and adoring the fast paced, heart jarring theme-tune. Also hard to believe that it was originally released in 1995 and I still have my original disks from when I brought it. At least, I think it’s the original.

Replaying the game this weekend on a PS3 was pretty hilarious – laughing at the sheer amount of miles that you can biff someone out of the ring was a particular highlight. Also figuring out that we can save the game and do the more fun stuff like getting the various weapons was also fun. But you know, if kinda brought back some other memories.

I recall Taki being my favourite character when I was younger – and that gets me thinking.
Can you fangirl over someone of the same gender?
Never really have before.
I think I liked to imagine that Taki was an OC of mine who was very similar, a ninja assassin called Kaede. Kaede stuck with me for a long time – she even stuck with my Resident Evil phase of fangirling (Which reminds me… I have so much still to say) and she worked for Umbrella and become a researcher somehow, before betraying her employer to work for the Syphid Corporation.
(LOL – Side tracked) 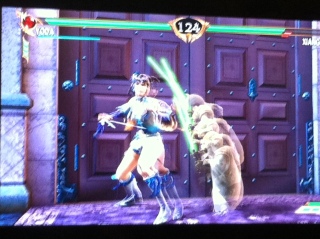 We moved on from Soul Blade to Soul Calibur IV

Where we found it rather humorous that Yoda mainly beat up girls!!
And Ring Outs got even more hilarious if you followed your opponent after they took the dive!

Why not Should Calibur V?
Check out my thoughts on the latest release in the series here