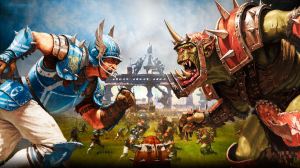 Seeing as we sacked off Elders Scrolls Online, we needed something to fill in that bit of void in our lives. Personally I had been in the mood for a strategy game and the offerings for that particular genre for the PS4 seem somewhat lacking. Especially in the shops local to us.

Initially I was somewhat hesitant to get Blood Bowl 2, seeing as we played a lot of the first offering on the PC to death and I didn’t know what Blood Bowl 2 would offer that would make playing it a new experience. Also there was a bit of a dilemma over it would actually be worth it as a game or not. The box seemed to boast that there was a campaign and an online league mode. What about offline modes for those that don’t want to be social gamers and play with others like us? But we took one for the team and went ahead with it – after looking over some forums for some rather vague answers to our question.

Initial thoughts are pretty good – although the campaign mode seems to be nothing more than a drawn out tutorial, which seasoned players like the husband and I really don’t need to go through.

If you know nothing about Blood Bowl, it’s a table top game by Games Workshop (which is currently unavailable to buy, but there are rumours of a release by their twin company Forge World in the non-to-distant future) which stylises American Football with fantasy elements and more violence. So as well as boring humans, you’ve got Orcs, Dwarves, Elves, Chaos and Skaven races. Additionally you can get Norsemen, Lizardmen and Wood-Elves at an extra cost from the PlayStation Store.

The game is very faithful to the table top variant in the fact that it relies on dice rolls – which always adds an element of random chance to the game as well as skill. It’s an element of the game that might irritate some people who don’t know what they’re getting into – expecting a real time sports game – but I would have to question those peoples intelligence in the first place!

So, you have dice rolls for pretty much everything; smashing someones head in, picking up and passing the ball, catching the ball, getting away from another player. What amount of die you roll varies on the players personal statistics and as character do impressive things they level up to improve and gain skills – just like in your average RPG. Though our team hasn’t actually managed it yet because it’s so new!

Also seeing as we are just in the beginnings of our Blood Bowl stardom, I do have some concerns. In the first offering of the game it seemed like the only way it got harder was to make the dice roll in the AI’s favour rather than upping the skill of the player – I worry about if that is the case with this offering as well – seeing as that’s really what made us stop playing. Fair enough if you’re beaten by someone who out plays you; not so good to have the dice improperly balanced! No one likes a weighted hit dice!

We’ll have to see as our team develops and improves and after we have played a few more games.

Some more positives of the game is the fact that it looks so pretty! There are some wonderful animations when someone hits the deck and the improved Cabalvision elements are also really good. Having a preview in the bottom corner of what each dice roll outcome means is a nice addition – not everyone knows what the skull means as a result! Although the repetition of some of the jokes is getting a little boring already…
The addition of a Bretonian team is nice too!

I’m just curious as to what Age of Sigmar might mean for Blood Bowl!