I know we all have to start somewhere with our art, but even so I am a bit embarrassed to even share this one with everyone so publicly.

It’s the first picture of my first furry character, then called Cenobite, I changed his name to Torquemada. Mostly to give him a bit more originality and after the priest that Lance Henriksen plays in The Pit and the Pendulum (something else that I should blog about at some point) If it’s not glaringly obvious by the background, he was made as a Hellraiser fan character. A furry, but also a cenobite. He has developed a bit since his first design, trying out several different designs along the way – but he has always kept the Hellraiser/Cenobite aesthetic to him. The whole long leather skirt and tortured look.

At one point he featured a lot of nails in his design, mostly in his cheeks and shoulders. One aspect of his design that I like and have tried to keep is barbed wire wrapped around his tail as well as as many piercings  and hooks I can fit into his ears as possible – these often take the form of spikes and chains.

Torquemada took a fair while to pin down a finalised design for. I remember changing him up a lot before I settled with a final look – even than I changed his scars/wounds a bit after settling on his design.

I added the insulting image of an inverted cross to his forehead in order to irritate another of my characters; Priest – which is something that remains on his still. The spiked collar was added purely to ‘take the piss’ out of those who go for more Gothic attire. Not because I dislike the subculture, but because I believe that’s what Cenobites would actually do if they ever met a ‘Goth.’

I now tend to draw Torquemada topless, on order to show off the Y morticians wound on his chest, and in a long leather skirt.

Despite being one of my oldest characters I’ve never done that much with him. I’ve not commissioned artwork of him as much as some of my other characters, but he is a character that I still hold dear to my heart, he has been with me since 2002 and is the oldest of my furry characters – which is maybe why he feels so special to me, but they all feel special and long serving at this point. 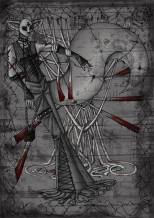 When is comes to his nature, he isn’t exactly a nice character. He is the one that preys upon all my others – which I think fits with the fact he is meant to be a chihuahua. I’ve never actually met a nice chihuahua! He has turned into a character that has come to represent my fears and everything that holds me back in my life. I strongly believe we are our worst enemies in life. I cling to him and he, in his own way, keeps me safe.

Everything about me wishes that I could be rid of everything that he represents; my anger, depression and anxieties. But he still offers some sort of misplaced comfort.