I just wanted to take a bit of a break from my writing challenge today – mostly because it’ll be a difficult one to write about – but I still wanted to post an update for the blog to attempt to keep things going here. 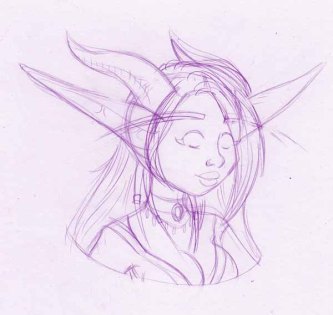 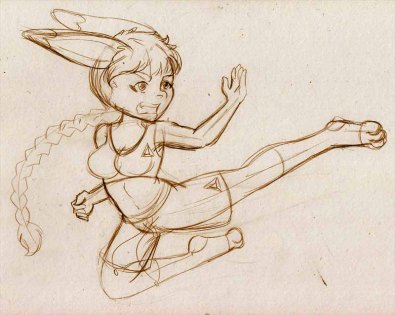 So I thought I would post a couple of sketches that I’ve managed to do this week.

They’re both out of my comfort zone really, the bust being a World of Warcraft character that I’ve been developing. I’ve not actually played any Warcraft since Cataclysm, but I always enjoyed the characters. She is a draenei/nightelf hybrid. And writing this blog post, I really should reply to the roleplay thread that I’ve got going on with her!

The other picture is for a friend of their UFC rabbit Kekoa and she was a fine fit for drawing a more dynamic pose.

I’m also going to leave my Patreon link here, it’s also at the top of my page. The whole idea of updating this place more often is to help me streamline where I post things online. I am mostly trying to cut down on procrastination time by cutting out some of the places I visit. Although I don’t want to make my art anything exclusive and only post it to Patreon, it would be nice to have a bit of support to say, ‘You’re doing good.’
So, I’ll be updating here, twitter, Patreon (obviously) and facebook – with the occasional art trade going into my dA gallery or sta.sh.
I honestly don’t know about leaving dA because quite honestly, it’s been a part of my life for 14 years (I think) and I’ve visited most days since then. I just don’t know if I have it in me to leave it behind just yet? It’s something to consider. I really need to have a long, deep think about some of the things I want in life and see if they marry up with the things that I can actually do.