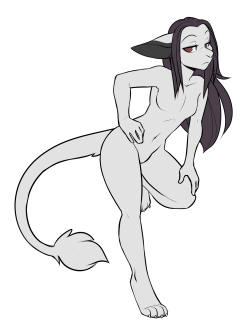 I’ve been loosely toying with the idea of dragging up ‘Sea of Souls‘ from the depths again.

I’ve always wanted to play with characters from a rich world, who are all connected together in some larger story somehow – I’d originally been thinking of changing my furry characters into ‘humans’ in an alternative universe, but the idea didn’t pan out too well so I abandoned it.

I’ve brought up ‘Sea of Souls’ a couple of times on this blog, but somehow it’s always slipped by me. I’ve never really known how to take on such a big project and become overwhelmed by it and the ideas I have had for it! I feel like I want to take on this project once again, but at the same time I feel hesitant.

I know there are some concepts in this project – mostly Skaejre (pictured above) and her profession. She is a Soul Forager which is pretty much a Death Shaman/Druid.

“A hunter of the dying. It is her role – along with her kinsmen – to find the Souls of those on the brink of death and take the remnants of their life and add it to their own. Or to spare them; depending on their whim.”

I just think this concept might be a bone of contention.

Yet, why should I care? I came up with the idea back in 2007/08 sometime! I know I can’t let the potential actions of others stop me doing something I would like to do; and yet, it’s harder to let go of that thought more than I’d like to say.

All I really want, is to work on something that I could leave as some sort of ‘legacy’ for my son. Something that we can both be proud of some-day. Ha. Saying that makes me feel really, lame, I guess? But, I am determined to be able to say ‘I did that,’ to him one day and it be something I can be proud of.

Uploading a simple reference picture here is a start, while I figure out the next steps to take in this, where to host the project and all that complicated thought process stuff that goes on in the background.